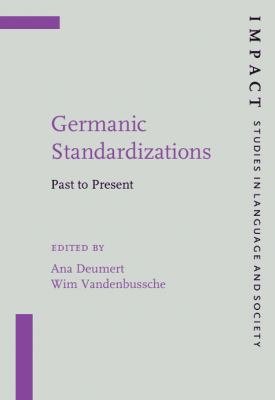 This volume presents a comparative, socio-historical study of the Germanic standard languages (Afrikaans, Danish, Dutch, English, Faroese, Frisian, German, Icelandic, Low German, Luxemburgish, Norwegian, Scots, Swedish, Yiddish as well as the Caribbean and Pacific Creole languages). Each of the 16 orginal chapters systematically discusses central aspects of the standardization process, including dialect selection, codification, elaboration and diffusion of the standard norm across the speech community, as well as incipient processes of de-standardization and re-standardization. The strongly comparative orientation of the contributions allow for the identification of broad similarities as well as intriguing differences across a wide range of historically and socially diverse language histories. Two chapters by the editors provide an overview of the theoretical background and rationale of comparative standardization research, and outline directions for further research in the area. The volume will be of interest to language historians as well as sociolinguists in general.

Authors: Andrew R. Linn, Nicola McLelland
Categories: Language Arts & Disciplines
Type: BOOK - Published: 2002-12-31 - Publisher: John Benjamins Publishing
This volume presents fourteen case studies of standardization processes in eleven different Germanic languages. Together, the contributions confront problematic issues in standardization which will be of interest to sociolinguists, as well as to historical linguists from all language disciplines. The papers cover a historical range from the Middle Ages to

Authors: Ana Deumert
Categories: Language Arts & Disciplines
Type: BOOK - Published: 2004-01-01 - Publisher: John Benjamins Publishing
Language Standardization and Language Change describes the formation of an early standard norm at the Cape around 1900. The processes of variant reduction and sociolinguistic focusing which accompanied the early standardization history of Afrikaans (or 'Cape Dutch' as it was then called) are analysed within the broad methodological framework of

The Cambridge Handbook of Language Standardization