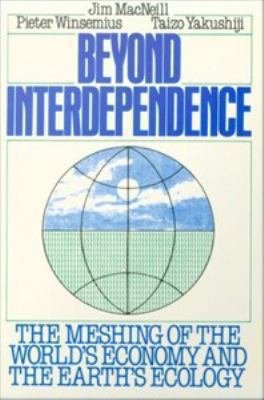 Over the last year, the world has seen some cataclysmic changes. Eastern Europe is no longer yoked with Soviet communism, Germany is again a single, powerful nation, and Russia itself is pursuing a free-market economy at an almost frantic pace. Yet as we focus on the triumph of democracy, it is easy to overlook the potentially catastrophic changes that face the world environment, changes that are inextricably linked to the workings of the political and economic institutions of our time.Beyond Interdependence builds upon the Brundtland Commission's landmark report Our Common Future, a book that has been hailed as "the most important document of the decade on the future of the world" and has sold over one-half million copies in nineteen foreign languages. Dr. Jim MacNeill, the principal author of both works, has in this latest study extended the Commission's analysis of the critical relationships between the global environment, the world economy, and the international order. Together with his eminent colleagues, Pieter Winsemius and Taizo Yakushiji, MacNeill shows that while our global economy and ecology have become completely interlocked, they have remained separate in our institutions, and in the minds of our policymakers. The result is a wide range of domestic and international policies that are accelerating the depletion of Earth's basic ecological (and economic) capital--its rivers, lakes, and oceans, its soils and forests, its flora and fauna, and its ozone shield. These short-sighted policies also threaten us in the next century with a greater rise in global warming and sea level than have occurred in the ten-thousand years since the last ice age. The authors argue that this environmental degradation and resource depletion will be the principal source of interstate conflict in the post-cold war world.Providing a fresh analysis of the issues of global change, and taking into account such recent events as the tidal-shift in East/West relations and the G7 Economic Summit in Houston, Beyond Interdependence shows how industrialized nations can take unilateral action to address environmental threats while improving macroeconomic efficiency and international competitiveness. It also demonstrates how developed nations can negotiate a series of mutually advantageous "bargains" with Eastern European and Third World nations.With its incisive analysis and far-reaching recommendations for policy reform, Beyond Interdependence shows us how we can act urgently but intelligently to advance our common future.

Beyond Interdependence : The Meshing of the World's Economy and the Earth's Ecology

Authors: Ottawa Jim MacNeill Senior Fellow Institute for Research on Public Policy, Physical Planning Pieter Winsemius Senior Fellow former Dutch Minister of Housing, and Environment, Taizo Yakushiji Professor of Technology and International Relations Saitama University
Categories: Business & Economics
Type: BOOK - Published: 1991-08-01 - Publisher: Oxford University Press, USA
Over the last year, the world has seen some cataclysmic changes. Eastern Europe is no longer yoked with Soviet communism, Germany is again a single, powerful nation, and Russia itself is pursuing a free-market economy at an almost frantic pace. Yet as we focus on the triumph of democracy, it

Beyond Interdependence: the Meshing of the Worlds Economy and the Earths Ecology

Authors: Cheryl Desha, Charlie Hargroves, Michael Harrison Smith
Categories: Business & Economics
Type: BOOK - Published: 2010-09-23 - Publisher: Routledge
Cents and Sustainability is a clear-sighted response to the 1987 call by Dr Gro Brundtland in Our Common Future to achieve a new era of economic growth that is 'forceful and at the same time socially and environmentally sustainable'. The Brundtland Report argued that not only was it achievable, but

Economics and the Global Environment

Globalisation and Interdependence in the International Political Economy

The Rules of the Game in the Global Economy

Authors: Lee E. Preston, Duane Windsor
Categories: Business & Economics
Type: BOOK - Published: 1997-03-31 - Publisher: Springer Science & Business Media
The subject of this study is the way that finns, industries, and nations organize their relationships with one another in order to engage in international business. To the casual observer, the processes of buying and selling, borrowing and lending, investing and receiving investment returns may seem much the same, whether